All night long the rain continued and the thunderstorm bellowed its rage out over the little village and the creatures hiding around there. Otter pushed herself and her cubs as far into the hedge as possible to protect them, their little bodies nestled into her own.

When the sun rose, the storm had ended but the river was in full spate. Her old home had gone. So had her mate. Otter raised her snout to the sky and let out a long shriek of loss and grief. Farmcat and vixen came, picking their way through the sodden fields. Frog hopped up and stared glumly at them, his big eyes full of sorrow. Hawk landed in a tree and stared about her.

“Need help,” Farmcat said firmly. “Bard needs help!” So hawk took off and flew, calling to all her kin to come and search the river with her. Herons, woodpeckers, jays, all the flying river folk, scoured the banks and passed on the message to their families and friends downstream. Finally, when Otter had almost lost hope, a kingfisher alighted on the branch above her head, panting with exhaustion.

“He not die. He good.” A passing cormorant had spied the dog otter, sprawled on the nearest beach, barely able to move, but breathing.

“But how many days’ swim is that?” Otter wondered. How would she get to him and who would care for the cubs?

“Play with tadpoles?” Frog offered timidly. He wanted to help and it was all he could think to do, so he amused them by flicking his long, sticky tongue out and bopping them on the snout. The cubs rolled on their backs, laughing and begging Frog to tickle them more.

Farmcat re-appeared with another animal and Otter stiffened, her whiskers quivering – it was a dog! Vixen sat by Otter and growled deep in her throat. “Touch Otter and you die, hand-fed!” The dog ignored Vixen and bounded up to Otter. He was a big, bouncy dog with a lolling tongue and sticky-up ears.

“Puppies’ pa gone? Bad, baaaaaad. Need our pet. Wait. I get.” Otter couldn’t believe her ears. He wanted to get a human to help them? Since when could a human help? Farmcat sniggered to herself and led Otter to the hedge, leaving Frog to play with the cubs. “Watch, seee neow – human do wot dog sez.”

Otter rubbed her paws on her eyes. It wasn’t possible. The dog had got the human by the paw and was leaping around like a creature possessed, barking and dragging her to the machine-that-moves. He scrabbled his paws on a part of the machine and they both got in. The human made the machine move and the dog hung his head out to them, his tongue waving in the wind. 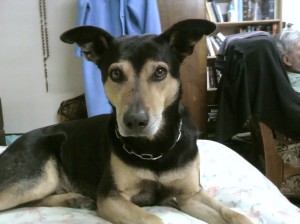